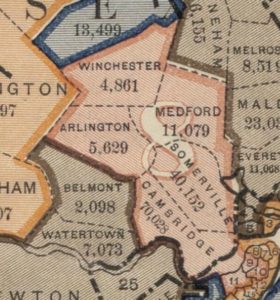 Belmont, often referred to as “The Town Of Homes” is a suburban town in the Middlesex County of one the most populous states of the United States, Massachusetts. This city lies in a valley between two ranges of hills, King’s Common and Strawberry Hill on the south and the valley of the Mystic River in the north. While the former separates it from Watertown, Arlington lies along the border of the latter. Belmont also shares its boundaries with the towns of Waltham (on the west), Cambridge (on the east), Lexington (on the northwest) and Boston. The city of Belmont has a population of around 24,500 as per the census of 2010.

The first settlement in the present-day Belmont can be dated back to 1630 when Sir Richard Saltonstall and 40 other families moved to this area to start an agricultural community. Back then this area was known as Pequosette, after the Indian tribe dwelling there and it spread over present day Waltham, Weston, Lincoln, and Watertown. However, the name of the area was soon changed to Watertown.

In 1843, a railroad was built which ran through the town of Belmont. As a result, settlements started blooming near the Wellington Station(present day Belmont Center) and other railway stations like Waverley Station(later known as Waverly Square) and Hill’s Crossing Station. These settlements slowly grew into villages, but the inhabitants faced a fair bit of problem. They had to travel to Watertown or Waltham to carry out any government related work like voting and attending meetings. So, in the 1850s a group of 1000 people came forward with their demand to form a separate town. John Perkins Cushing was the most enthusiastic of them all. He was the largest taxpayer there and demanded that the new city is named after his 200-acre estate “Bellmont”. The Cushing Square was named after him and what remained of his burnt down estate became a part of Belmont Public Library. The towns of Waltham, Watertown, and Cambridge opposed this idea vehemently. However, on 18th March 1859, the people won the case and the new Town of Belmont was born.

The new town was formed of an area of 5 square miles of the neighboring towns and about 1,100 residents. Belmont came to be formed of farms and market gardens widely known for its quality produce of celery, berries, tomatoes, other fruits, and livestock. The initial establishment also included a part of Fresh Pond of Cambridge. However, a slaughterhouse located in the Pond area which formed the water supply of Cambridge led to a controversy. In 1880, that area was added to the Cambridge town.

Throughout the 20th century, with the development of better roads and transport system, the city of Belmont continued to shift from its agrarian economy to more commercial activities like mining and waste management. Large dumping grounds were converted to parts of Belmont High School and the Clay Pit Pond through active environment planning. In the 1920s, a large number of teachers, scientists, physicians moved to the Belmont area, nearly doubling its population. In 1933, the Cushing Square area developed as the most important commercial and business center of the area. Today, Belmont is primarily a residential suburb with dense settlements and large greenhouse estates.